A secure private field for your dogs’ wellbeing

Welcome to my Dog Walking and Pet Care Service Biggly Boo. Established in 2013 and still growing I have built my reputation on being friendly, reliable, flexible and offering great customer service. I provide first class loving care for pets.

I’m Mandy and have shared my life with animals since I was born.

My earliest pets that I have a good memory of were two very tolerant and laid back tabby cats called Felix and Twink. I remember my Mum taking me to collect them when I was three years old.

I later went on to owning various other pets including hamsters, rats, mice and a Chinchilla called Hattie.

In my thirties, I bred rabbits and guinea pigs. At one point I owned over forty. One rabbit that I have very fond memories of was a Flemish Giant called Gulliver. A loveable, larger than life character who weighed in at a massive two stone.

I currently own a Black Labrador named Biggles, affectionately known as BigglyBoo who has the honour of my business being named after him.

I have owned my rescue cat Marmite since 2009.

In 2021 two rats called Bowser, and Yoshi joined our pet family, along with a chicken called Arlene.

At Biggly Boo we will look after almost any animal. We currently have over eighty satisfied recurring customers on our books. Some of which include, hens, rabbits, fish, canaries, hamsters, giant African land snail, guinea pigs, tortoises and the obvious cats and dogs.

Amongst the most exotic we have cared for were a Spotted Gecko and a Chilean Rose Tarantula called Susie.

I love to be surrounded by animals, being out in all weathers with lots of furry friend’s getting plenty of fresh air and exercise. It’s the best job in the world for me.

At Biggly Boo we have hour long sessions available in our private, secure field.

Our field boasts many benefits for your four-legged family member, including:

The sessions also offer excellent socialisation with other dogs they know and can become friends with. Various toys are provided to enhance your dog’s enjoyment.

Places on these sessions are very popular and highly sought after.

We are pleased to be able to provide a reliable Cat and Pet Care service. When you can’t be there for your pet because you are going away on holiday, business or a hospital stay we can come to your home and care for them. Cats especially are often much happier in their own territory. We can visit once or twice a day.

At your request, we are happy to put your bin out on collection day, open and shut curtains and turn lights on and off. This has the benefit of making your house appear occupied in your absence.

You will receive text/WhatsApp updates every couple of days for your reassurance.

Only dogs that are compatible with each other will be put together on group walks. Great care is taken when introducing a new dog to a group walk to ensure all the dogs get along with each other.

An older dog that likes a leisurely stroll won’t be put with a young boisterous dog who is likely to annoy it. Happy dogs mean stress-free walks.

We provide balls on some walks to enhance your dogs enjoyment.

Only dogs that are compatible will be put together on group walks. A young boisterous adolescent who likes to bounce around with other dogs would not be put with an elderly dog who is happy with a Leisurely stroll, ensuring a perfect stress-free happy walk.

Some dogs prefer to be walked on their own if maybe they are nervous or perhaps have behavioural issues making them harder to handle and so require individual attention. Individual walks can be requested. There is a slightly higher cost for this service.

Poo bags are provided as part of our service. We will always clean up after your dog whilst we are walking it regardless of where the mess has been deposited, not just on public footpaths.

We check poo to look for any adverse contents such as blood, worms or any odd things your dog may have swallowed. If we find anything or your dog has diarrhoea you will always be notified immediately by text.

With two or more dogs from the same household the first dog is charged at the normal rate and a 50% discount is applied to the other dog/dogs.

Pet transportation £15.00 (pet to vet or pet to groomer service).
Weekends will incur a £3.00 surcharge. (per walk or visit).
Anyone wishing to cancel a pre-booked dog walk must give 24hrs notice, otherwise, a cancellation fee will be applied.

More than 24hrs notice – No Charge

More than 1 weeks notice – No Charge

Payment is accepted by cash, cheque or transfer.

We are DBS/CRB Checked and fully insured. Also, I have completed a Cat & Dog 1st Aid course with 1st Aiders and carry a first aid kit on board my vehicle.

You are welcome to leave your spare key in a secret place or give it to ourselves, we only keep your dog’s name on the key tag!

I am extremely conscientious and take extreme pride in my Dog Walking and Pet Sitting service in Leighton Buzzard.

Here at Biggly Boo, we understand how extremely precious your pets are to you. They are therefore treated with the same love, care and respect that our own pets receive.

Whilst your pets are in our care every effort is made to keep them safe, happy and content.

If for whatever reason your pet appears unhappy, anxious or in the case of dogs fails to bond with the others we will consult and work with you to find a solution you and your pet are both happy with.

We respectfully request all our new customers sign a copy of our terms and conditions, ensuring total understanding between both parties.

Play our game…Find the Pug! 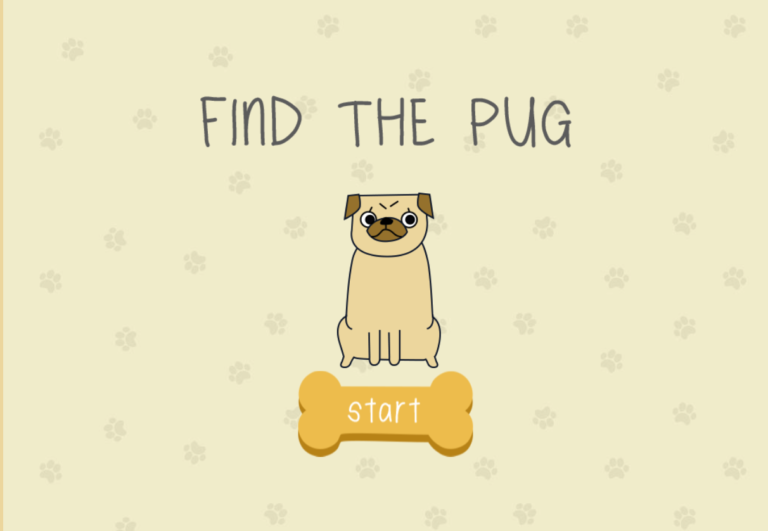